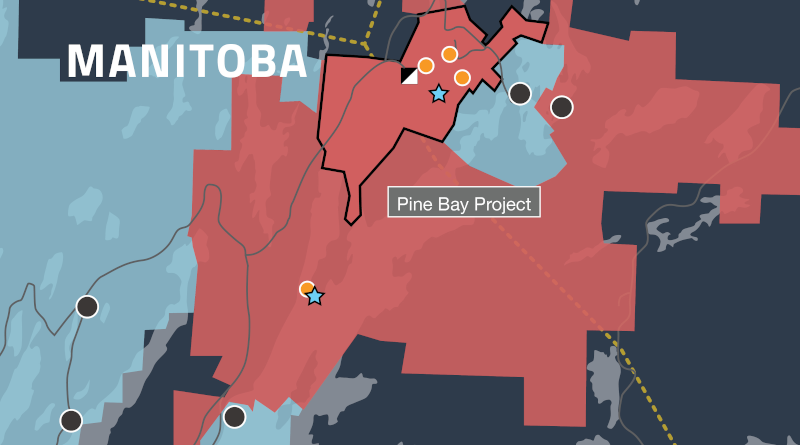 “We are extremely excited about the Rainbow Discovery Callinex has made at their Pine Bay Project,” stated Manitoba Chamber of Commerce president and CEO Chuck Davidson. “Northern Manitoba has been through a lot over the past few years. Callinex is a great partner and their team is extremely passionate about our province. We look forward to continuing to work with them on this exciting project that shows strong potential to bring jobs and prosperity to the Flin Flon area.”

The MMDF was launched by the Manitoba government in August 2020 with the specific goal of jump-starting mineral and economic development initiatives throughout the province. The MMDF aims to support new economic development opportunities that capitalize on existing assets across Manitoba.

Max Porterfield, President and CEO, stated, “The generous grant from the Manitoba Mineral Development Fund is a strong endorsement for the Rainbow Discovery.” Mr. Porterfield continued, “We are pleased to see the Manitobagovernment shares our vision for the potential the Rainbow Discovery has to create long-term jobs for the community of Flin Flon and strengthen the provincial economy.”

The community of Flin Flon’s future remains uncertain due to the impending closure of Hudbay’s 777 mine that’s slated to shut down in the first quarter of 2022. The Rainbow Discovery has been made on Callinex’s mineral lease, less than 250m from a high-voltage powerline and 550m from a historic shaft with direct road access to processing facilities in Flin Flon (See Figure 2).

Proceeds received from the grant will go directly to fund the ongoing drilling to test the size and extent of the Rainbow Discovery.

J.J. O’Donnell, P.Geo, a qualified person under National Instrument 43-101 and a Consulting Geologist for Callinex, has reviewed and approved the technical information in this news release.

Callinex Mines Inc. (TSXV: CNX) (OTC: CLLXF) is advancing its portfolio of base and precious metals rich deposits located in established Canadian mining jurisdictions. The portfolio is highlighted by the rapidly expanding Rainbow Discovery at its Pine Bay Project located near existing infrastructure in the Flin Flon Mining District. Additionally, Callinex has emerging near-surface silver discoveries at its Nash Creek Project located in the Bathurst Mining District of New Brunswick. A 2018 PEA on the Company’s Bathurst projects outlined a mine plan that generates a strong economic return with a pre-tax IRR of 34.1% (25.2% post-tax) and NPV8% of $230 million ($128 million post-tax).

Norm Mercer talks about the boom in Newfoundland & Labrador